Dishforth Airfield is situated alongside the A1 road, just a couple of miles North of Boroughbridge in North Yorkshire. It is currently home to 9 Regiment Army Air Corps, which operates the Westland Lynx in a troop transport role. It's situation in the North East of England ensures it is well placed to be able to make good use of the very large Otterburn training area in the extreme North of England.

Dishforth has a long history of aircraft operations since it's construction was started in 1936 as an RAF Bomber Command airfield. The standard crescent of C type hangars initially housed Handley Page Heyfords of 10 and 78 Sqns RAF. After changing to Whitleys by the start of the Second World War, the Royal Canadian Air Force moved in, and 425 and 426 Sqn flew Wellingtons from here, before the airfield returned to a training role prior to the end of the war. Transport Command training units were based here for many years before the airfield took on a role as a relief landing ground for the congested nearby RAF Linton-on-Ouse. In 1988 the airfield was handed over to the Army Air Corps who moved 9 Regiment in from Germany with their Gazelle and Lynx helicopters. After being the initial Apache operational units, 9 Regiment again operates Lynxes, and is scheduled to operate the first upgraded Lynx AH9As.

Our visit started mid-morning (to allow us to travel up from Suffolk during the morning) on a crisp and surprisingly cold Friday morning. Our host met us at the main gate and all of our group had turned up on time as expected. Following a brief introduction we were escorted through the hangars with free access to photograph whatever we wanted. Our host was happy to answer any and all the questions we posed, and was very amenable and took good care of us.

The Lynx helicopters on view today were a mixture of the 2 main current Army Air Corps versions. The older AH7 is an upgrade from the original "utility" AH1 skidded version. The AH9 is the wheeled version, much newer airframes but basically similar to the AH7, apart from the obvious wheeled undercarriage. This actually does offer an advantage in some circumstances, as it can allow for a "rolling" take-off, with a consequent ability to take off at a heavier weight. But, a closer look at the airframes revealed a plethora of other, less obvious differences, and I doubt that any 2 aircraft were identically configured. There were numerous different aerial, defensive aids, sensors, and weapons mounts visible on these airframes, revealing the many upgrades and modifications that are available to the fleet depending upon the specific role requirement.

9 Regiment have been on regular operations over a number of years, in both Iraq on Operation Telic as well as Afghanistan on Operation Herrick. At the time of our visit they were experiencing an unexpected return to normality for a few months, with just the normal routine flying training and UK exercises to occupy them. The crews had just returned from exercise in Scotland and the usual post exercise wash downs and engineering fixes were being carried out to get the majority of the airframes serviceable. Many of the crews and engineers especially are undertaking training courses at AgustaWestland in Yeovil in preparation for the imminent introduction of the upgraded Lynx AH9A. This sees the current "wheelie bin" Lynx AH9s re-engined with the Honeywell LHTEC CTS800-4N engines to replace the Rolls Royce Gems. This will provide the airframe with a very significant performance improvement, especially under "hot and high" conditions.

Once sufficient airframes are available at Dishforth and enough crews have been trained, 9 Regiment will once again return to Afghanistan on Operation Herrick, but this time with a helicopter much better suited to the high altitude and hot conditions that an Afghan summer will provide.

Thanks again go to our patient and informative hosts, and as usual, a cheque was presented by the society to them for their designated charities. 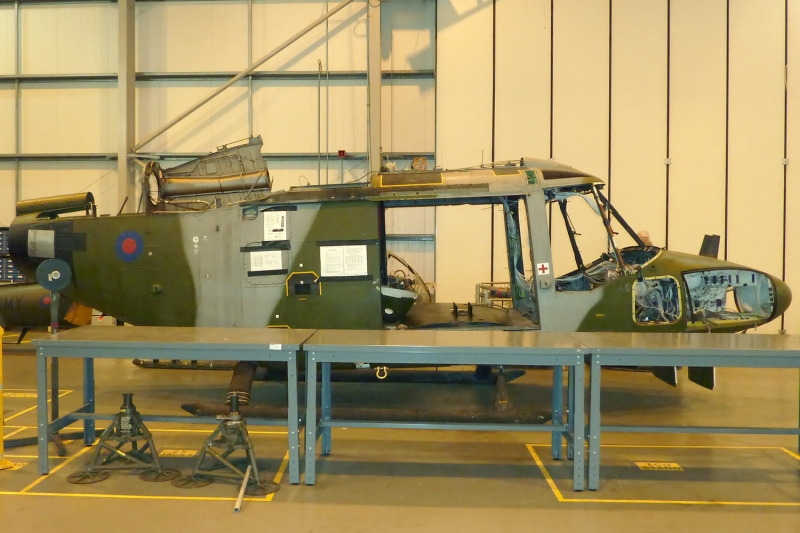