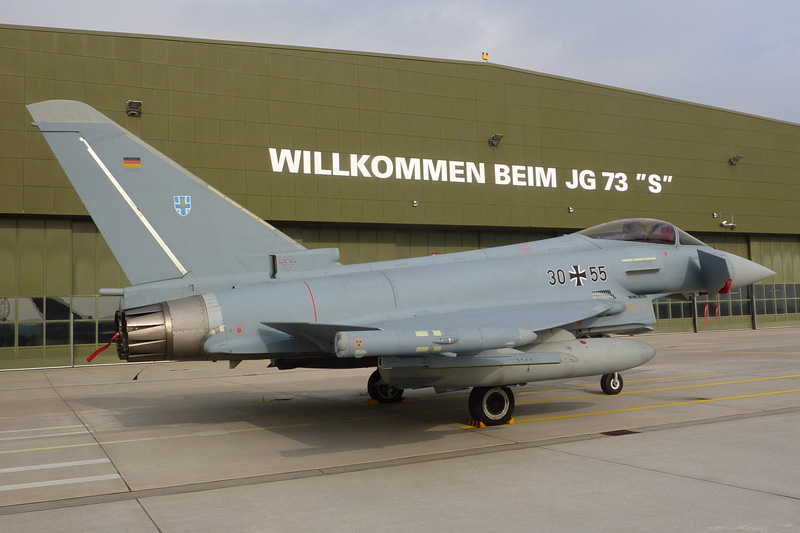 We decided to kick-off 2011 with an early visit overseas to catch some German Eurofighters (don't call them Typhoons!). German examples have not been particularly prevalent in their visits to UK shores, so if the mountain won't come to Mohammed, then Mohammed must go to the mountain, so to speak.

We decided to arrange the visit in February, so that there was less likely of any clashes with other events during the summer. We chose a Monday, to allow travellers to take advantage of a long weekend in Berlin if they fancied, and the afternoon timing was to cater for those travellers who only wanted a quick day trip. So, with all people's whims sated, we made our individual travel arrangements, with the aim of meeting up at the gate at the appointed time.

Laage is located in the North East of Germany, south of Rostock, in the old Eastern part of the country. The airfield is an old Warsaw Pact military base, but has been modernised for Eurofighter operations, and now also houses a new civilian passenger terminal on the Southern side of the runway.

JG-73 is a fighter and training wing, hosting two squadrons of Eurofighters. All German Eurofighter pilots are trained here, so there is a higher than normal quota of two-seat training versions of the jet based here. Previously flying ex East German Air Force MiG-29s, JG-73 is the longest serving Luftwaffe Eurofighter unit. Other Eurofighter wings are at Neuburg, in the Southe East of Germany (JG-74, ex F-4F Phantoms) and Norvenich, in the West of Germany (JbG-31, ex Tornado ground attack).

Once our party had assembled at the main gate, our hosts introduced themselves, welcoming us to the unit and detailing our itinerary. With exemplary German timing, our coach arrived and we embarked to our first port of call. Throughout the visit we were kept appraised of what was happening, and nothing was too much trouble. We visited both the squadrons, the main maintenance hangar, and were taken near the runway whilst the launches were taking place.

Aircraft noted during our visit are listed below:-

Thanks go to our superb hosts for an excellent visit.