Middle Wallop is the headquarters of the Army Air Corps, and is located just off the South East edge of Salisbury Plain, and ideal training area for helicopter crews. All AAC pilots are trained here, from the initial basic fixed wing training, through to the conversion courses for the operational Lynx and Apache units.

Middle Wallop airfield has seen operational service since the Second World War and is now a very active Army Air Corps airfield, despite not having a hard surface runway. 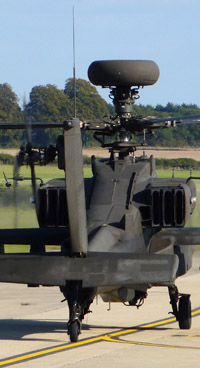 Our visit started after lunch, and our host met us and briefed us on the schedule for the day, along with the appropriate Health and Safety and security considerations.

Our first port of call was the Gazelle Depth Support Hub. In here Gazelle and Lynx helicopters are stripped down to a surprising extent as major maintenance tasks are undertaken. For some of the Gazelles especially, it is the end of the line for them, as after many years of service this light utility and observation helicopter is nearing the end of it's Army Air Corps career. The time-expired examples are stripped of all useable components, and the empty carcasses then disposed of for scrap.

The Army Air Corps Historic Aircraft Flight is based at Middle Wallop, and with only private funding manage to display a disparate variety of aircraft and helicopters at many airshows throughout the year.

After this, 671 Sqn operating Gazelle and Lynxes converts and refreshes crews to the more tactical type operations associated with these military types.

The last flying unit we visited was 673 Sqn, who train and convert crews to the awesome Westland WAH-64 Apache. This helicopter introduced a massive change in capability and provides the Army Air Corps an unsurpassed means of supporting the troops on the ground. This aircraft, with it's state of the art defensive suite and avionics sensors, coupled with the immensely powerful RTM engines is a world beating system that the crews have absolute faith in. It's operations in Afghanistan are widely published and the availability or otherwise of Apache helicopter support will often determine if a ground operation can proceed or not.

Thanks again go to our enthusiastic and informative host, and as usual, a donation was presented by the society to them for their designated cause.