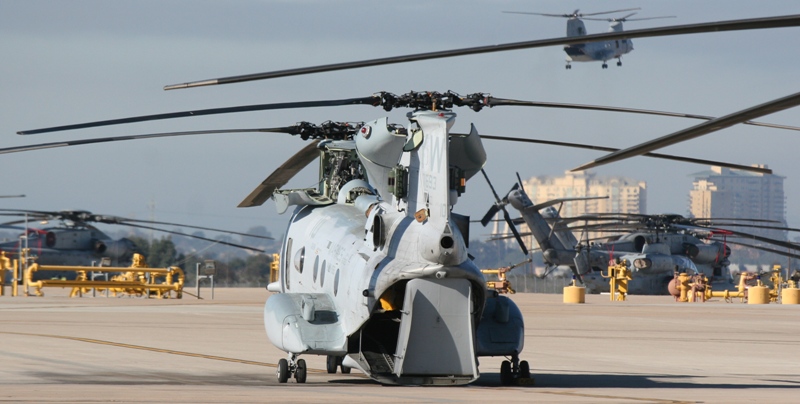 Miramar in Southern California is historically known throughout the world as the home of the USNavy Fighter Weapons School, "Top Gun". History and tradition though had no effect during the 1990's when it was decided that all the USNavy squadrons here would move elsewhere, as the base was being handed over to the USMC to house their units which were leaving El Toro. And so, Miramar MCAS, on the Northern outskirts of San Diego, is now a major USMC base, hosting a wide variety of operational types and units.

Our visit here followed previously successful trips around other California bases, and was organised by the Public Relations Office here. We turned up at the gate at the appointed time, and were met by our host, whose mini-van we all piled into for the duration of our visit. First port of call was the ramp of VMGR-352 "Raiders", whose Lockheed KC-130J Hercules fleet provide transport support and aerial refuelling capabilities to the USMC. We were free to take as many photographs as we wanted, and this proved to be the case as we travelled down the flight-lines to visit all the based units.

Next on the agenda were the F-18 Hornet flight-lines. Miramar is home to many USMC fighter-attack squadrons, and there was plenty of activity here with all the resident units participating in a busy flying programme. The USMC Hornet training and conversion unit, VMFAT-101 is one of the units, so they are always especially busy in training and converting crews to the F-18. Again, we were given as much time and freedom as we wanted to photograph the activities, and eventually we got back into the mini-van to continue on to the next flight-lines.

The USMC operate 2 main transport types, filling the medium and heavy helicopter transport roles. Sikorsky CH-53 Stallions fulfil the heavy role, whilst Boeing H-46 Seaknights currently take care of the medium role. These vintage helicopters are eventually to be replaced by the tilt-rotor Bell V-22 Osprey, and the first example for Miramar had only recently been delivered to the base. There were also some UH-1 and AH-1s on the flight-line, gaining training experience in escorting the larger transport helicopters.

Again, we had as much opportunity and freedom to photograph as we wanted, and we made the most of it. Once satisfied, we returned to the mini-van and departed back to the main gate. Thanks go to our superb escort, and all the Public Relations staff, as well as all the other USMC staff we encountered.

Units in residence during our visit are listed below:-

Aircraft noted during our visit included:-